NEWARK – Steve Price, safety director for Worcester County’s public schools, ended the work day Monday with a sigh of relief. Though various schools throughout the region had received bomb threats, no facilities in Worcester County had been targeted.

That all changed Tuesday morning, as a caller contacted Ocean City Elementary School and indicated there was a bomb in the building. While concerned, Price was not unprepared. Multiple briefings from the Maryland Center for School Safety after Monday’s threats kept him cognizant of the latest information and safety recommendations.

Regardless of the manner of threat, Price says the school system followed the protocols it had in place for such emergencies. At both schools, students were evacuated after the threats were received. Children from Ocean City Elementary were taken to a local fire station while the following day students from the high school were evacuated to the nearby middle school. In both cases, the Worcester County Sheriff’s Office responded with dogs trained to detect explosives and eventually cleared the buildings for reentry.

“At this time, an ongoing investigation is continuing with the assistance from our federal and state partners,” a message on the Worcester County Sheriff’s Office’s Facebook page read Wednesday afternoon. “Members of this office have been in constant contact with surrounding jurisdictions and federal authorities to compare these calls that schools in our area have been receiving. We understand the frustration that parents and staff are facing and we are aggressively pursuing any leads that we discover during these investigations.”

Price said the various law enforcement agencies involved Tuesday and Wednesday attended debriefing sessions with school system officials after each event. There, they discussed any changes that needed to be made or additional procedures that needed to be explored.

“A bomb threat is not something we typically do in Worcester County,” Price said. “We’ve had it in our safety plans but this is a new challenge for us. There’s always room for improvement.”

Price said that from what he’d heard, most parents were satisfied with the way the threats were handled. After each, they received automated messages from the school system advising them of the situation and subsequent evacuations. He said the fact that many of them opted to pick up their students immediately was not unanticipated.

“We understand that instinct,” he said. “We’ll make that process work. It’s another aspect of the total operation that we need to be prepared for.” 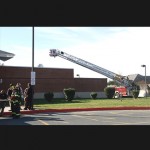 The second evacuation of the day on Tuesday at Ocean City Elementary School was due to smoke filling a classroom and hallway from a malfunctioning HVAC unit. Photo by Shawn Soper

While threats made to schools are always alarming, Price says the school system is much more prepared to handle them now than it was prior to the Sandy Hook school shooting in 2012. It was immediately following that tragic incident that local officials banded together to ensure that safety measures at Worcester County schools were increased. Physical improvements to facilities were made, buzzer entry systems were installed and deputies from the Worcester County Sheriff’s Office were assigned to schools.

“We accomplished that in reaction to Sandy Hook but as the world has changed those safety measures benefit us now as we face new challenges,” Price said.

The Maryland Center for School Safety was also created after Sandy Hook. Price says the office, which was established by the state, serves as a “clearinghouse” of information for school officials and provides them with information from law enforcement as well as other school systems and state government. Price says he’s been in contact with the center weekly since the terror attacks in Paris.

“We started having weekly conference calls,” he said. “It’s a really useful tool. That way when I go to the school board or to the superintendent it’s not just Steve Price talking it’s a group of law enforcement. It’s been very helpful.”

In the days since Tuesday and Wednesday’s bomb threats, the school system has worked to ensure things return to normal at Worcester County schools. In a message Wednesday, Superintendent of Schools Jerry Wilson commended students and staff for their understanding and thanked local law enforcement officials for their efforts.

“I want to assure our parents, staff, students and community members that we take any threat to the safety of our students and staff very seriously,” Wilson said. “We will continue to work with law enforcement to ensure that whoever is making these threats is identified and prosecuted to the fullest extent of the law.”

Price too said the assistance the schools had received from area law enforcement agencies had made the labor intensive evacuation process run smoothly in both cases. He said help from police and fire agencies proved particularly helpful Tuesday, as smoke was reported at Ocean City Elementary shortly after students returned to the building. Price said a malfunction of the HVAC system generated smoke that was reported in a classroom.

“I don’t know that anyone even saw flames,” he said. “There was a smoke in a classroom. It just happened to be ironic it was immediately following a bomb threat.”

Because of that parental concern was high, which is why Price said the quick response and investigation by police and firefighters played a key role.

“We wanted to be sure there was absolutely no connection,” he said. “We knew some people would jump to that conclusion.”

Regardless of the situation that might occur, Price says school officials will continue to focus on what matters most in the days ahead.

“Our number one priority is the safety and welfare of our students and staff,” he said.

At OCES on Tuesday morning, parent Steve Green, editor of this newspaper, observed the scene from a close vantage point.

“I happened to be dropping off my son late that morning at 9:30 a.m. as the evacuation was unfolding. Initially I thought it was a fire drill,” Green said. “We were there before the police arrived and was notified by an office staff member a bomb threat had been phoned in. We then just waited to see what we should do and observed a clear protocol in place that was being followed in tremendous detail through mobile communication between administrators and teachers. The students handled everything in stride and the teachers deserve the credit for that. Students were initially lined up on the sidewalk immediately outside the school and then relocated to a nearby field before being bused to the fire station.”