OCEAN PINES — Principal Mark Record stands by the front doors of Most Blessed Sacrament Catholic School each morning when the kids arrive. He welcomes each of the almost 300 students by name, something he says he could never have done when he was in the public school system.

Record has been an educator for almost four decades on the Eastern Shore, but he says since he’s been at MBS, he finally feels like he’s doing, quite literally, the Lord’s work.

“If someone would have told me in 1985 that there would be a Catholic school in Ocean Pines, Md., I would’ve said that they were absolutely crazy,” said Record, “but not only is this school here, it’s growing and that growth has been remarkable.”

MBS opened in 2003 with approximately 175 students. In the 12 years since, the school has grown in both size and stature in the community.

“We really strive to develop the whole child,” said Lisa Edmunds, the school’s’ Director of Admissions and Advancement, “academically, spiritually, and emotionally.”

Like many private schools, MBS had its ups and downs with enrollment during the recession of 10 years ago, but Edmunds says interest and admissions are both on the rise.

Record believes parents are drawn to not only the safe and structured environment that MBS works tirelessly to create, but also what he calls the intentional integration of faith and academics.

“There’s a natural connection that can be made between our faith story and academics,” said Record. “The world is crazy today and I believe parents want to put their kids somewhere they can learn and feel safe.”

While MBS, which operates under the umbrella of the Catholic Diocese in Wilmington, Del., has enjoyed steady growth the past several years, the same cannot be said for Catholic schools nationwide.

The National Catholic Education Association (NCEA) reports that since 2005, enrollment in elementary education at Catholic schools has gone down more than 30 percent in urban dioceses and 20 percent in the rest of the US. Furthermore, at the height of catholic school popularity in the mid 1960’s, more than 5.2 million students were enrolled nationwide. Today, that number of students enrolled in catholic schools is just below two million.

Record says those numbers are even more startling when you look at it from a faith-based perspective. 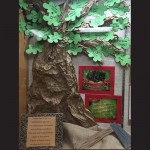 An example of the faith-based education being put to practical use within the Spanish curriculum is the second grade’s interpretation of the Barren Fig Tree parable that is on display in the school’s front office. Submitted Photo

“There was a swing to the left and as a result, many of our parents today either left the church entirely or were in that generation I call poorly catechized Catholics,” said Record, “but now, those parents are turning back to that tradition and faith that they essentially ran from in the first place and are coming to us because they know their kids need that.”

Ninety percent of the students enrolled at MBS are catholic, and while going to church regularly is not a prerequisite, Record says it would certainly be “disappointing” if students and their families didn’t attend mass.

Being a part of a church does play into the admission process, however, as parents must sign a “proof of parish” form during the application process, and there are different pricing structures (about $2,000) for “in-parish” and “out-of-parish” tuition.

“The kids are getting the parents back into the faith now or in some cases, for the very first time,” said Record. “Our RCIA program (Rite of Christian Initiation for Adults) has grown substantially.”

For Record, who recalls feeling like he had to hide the fact that he was a devout catholic in the public school system, he has excelled in a roll where he doesn’t have to try and fit into a hierarchy, because to be frank, he is the hierarchy.

“We have one administrator here,” he said. “I hire the teachers, negotiate their contracts and do their evaluations. Without all that oversight, we can make site based decisions that are the best ones for the kids who go to school here.”

The question that is often posed by skeptics of a faith-based education is where God fits in core subject learning.

At MBS, Edmunds says the answer is essentially everywhere.

“We are a bit of an anomaly because we have adopted what’s called the Stream Initiative, which is kind of an offshoot of the STEM program,” said Edmunds. “So, we are an arts integration school and we integrate religion in with our core subjects as well.”

Yet, while religion is a dedicated class that happens daily, Edmunds says there isn’t a dedicated religion teacher in the lower grades.

“We do quite a bit of professional development for our teachers concerning religious instruction,” said Edmunds. “We rely on their discretion to know when to integrate in a faith-based lesson with something that’s being taught in social studies, for instance. They do an amazing job at it.”

However, one common denominator between a catholic school like MBS and public schools here in our region is the implementation of Common Core math concepts.

“We feel that it’s unavoidable because

kids are going to be taking the PSAT and the SAT and those tests are very closely aligned with Common Core,” said Record. “So if we didn’t prepare them for that, we’d be doing these kids a disservice. We offer a very sound curriculum that is constantly changing to prepare students to be citizens of the 21st century.”

That includes a one-to-one digital learning ratio for middle school students and the goal of raising funds that will ensure that each student at MBS is given a Microsoft Surfacepro3 tablet upon entering middle school.

Edmunds says the school’s growing athletics program is also a draw for parents looking for the right place to send their children.

“It’s really been a remarkable rise here at MBS in the past seven or eight years,” said Record. “It’s much more than just a shift. I like to call it the perfect faith storm. I love that I know all the kids’ names here. You can’t do that with 1,500 kids coming through the doors. The climate and culture of this school is a much more fertile environment to nurture children.”