BIOSHOPVILLE — Teamwork between first responders, an allied law enforcement agency and the 911 dispatch center resulted in the rescue of a victim from a residential fire in Bishopville on Sunday. 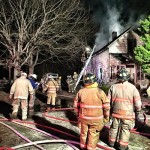 Crews are pictured on the scene of a residential fire on Hotel Road in Bishopville Sunday evening. Photo courtesy of Bishopville Volunteer Fire Department

Around 7:20 p.m. on Sunday, the Bishopville, Showell and Selbyville Volunteer Fire companies were alerted to a structure fire with entrapment on Hotel Road in Bishopville. A Worcester County 911 call taker was able to maintain contact with the person trapped inside the burning residence, which allowed first responders to gain detailed information about the unfolding situation.

First-arriving firefighters and a Worcester County Sheriff’s deputy were able to pull the victim, who was roughly four feet from the door, out of the house despite the heavy smoke they faced. The victim was treated by EMS, but refused transport to the hospital. A second victim who self-evacuated was transported to Atlantic General Hospital with minor injuries.

The strong teamwork displayed by the first responders and local law enforcement to the diligence displayed by the 911 dispatcher in maintaining contact with the victim resulted in a happy ending in the incident, which could have very easily resulted in a loss of life. The Worcester County Sheriff’s Office, the Showell, Bishopville, Selbyville and Ocean Pines Volunteer Fire Companies and Worcester County Emergency Services all assisted in the incident.

WEST OCEAN CITY — A Delaware woman was charged with driving under the influence and negligent driving last Sunday after allegedly striking a parked car at a West Ocean City restaurant and attempting to leave the scene.

Around 5:50 p.m. last Sunday, Maryland State Police troopers responded to the Harborside Bar and Grill in West Ocean City for a reported motor vehicle collision. The preliminary investigation revealed a 2014 Volkswagen driven by Jacqueline Keenan, 25, of Laurel, Del., struck a 2006 Chevy truck in the parking lot. A witness reported the collision and provided police with a tag number.

MSP troopers located Keenan and allegedly detected an odor of alcoholic beverage coming from her breath and person, according to police reports. Keenan was administered a series of field sobriety tests, which she did not complete to the officers’ satisfaction, and was subsequently arrested for driving under the influence and negligent driving. Once at the MSP Berlin barrack, Keenan refused to consent to a blood-alcohol test.

Around 10 p.m. last Friday, the Maryland State Police conducted a DUI sobriety checkpoint on Route 611 at Airport Road. The MSP was assisted in the checkpoint by the Worcester County Sheriff’s Office, the Berlin Police, Ocean Pines Police, Ocean City Police and the State Highway Administration (SHA). Also in attendance was a representative from Mothers Against Drunk Driving (MADD).

The checkpoint location was chosen due to the fact many of the alcohol-related collisions in Worcester County occur on or near Route 611, according to the MSP. The checkpoint opened at 10 p.m. and closed at 12 a.m., after which the MSP and allied agencies conducted saturation patrols in the area.

A total of 101 vehicles were stopped during the checkpoint, resulting in one DUI arrest. The lone DUI arrest came after a vehicle approached the checkpoint and made a U-turn and the driver and passenger attempted to switch positions.

OCEAN CITY — One of two teens arrested in November after allegedly uprooting a “Ripley’s Believe it or Not” sign near the Inlet and dragging it across the Boardwalk and Somerset Street before getting caught in a West Ocean City restaurant pleaded guilty last week to malicious destruction of property and was fined and placed on probation.

Around 10:30 p.m. on Nov. 14, an OCPD officer responded to the area of Somerset Street for a reported theft that had just occurred. The caller told police an unidentified male and female were seen dragging a “Ripley’s Believe it or Not” parking sign down Somerset Street. When the witness yelled at the pair to stop, they abandoned the sign and fled.

The witness reported the suspects fled the scene in a Chevy pick-up truck with a tool box in the back of it. The original responding officer went to Somerset Street and saw the sign, which had been bent and pulled from the ground. Concrete was still attached to the base of the pole. The officer observed drag and gouge marks on the pavers on Somerset Street, the steps leading to the Boardwalk and the concrete edge of the Boardwalk.

The officer was ready to document the scene with photographs when Ocean City Communications received a call from an individual who had seen the suspects’ vehicle. The witness told police soon after the description was broadcasted, he observed the truck traveling through the alleys at 2nd Street between Baltimore Ave. and Philadelphia Ave. The witness told police he followed the truck across the bridge and into the Outback Steakhouse parking lot.

OCPD officer responded to the Outback Steakhouse and observed the truck in the parking lot. The officers were told there was only one table left in the restaurant and the group had entered just minutes earlier. The officers approached the group and asked who owned the truck and were told by a suspect later identified as Logan Grubb, 18, of Arnold, Md., that it was his.

As officers spoke to the group and advised them of why they were questioning them, another suspect, identified as Olivia Husby, 18, of Annapolis, told police she and Grubb had attempted to steal the sign. When questioned further, Grubb admitted he had removed the sign and Husby had helped him drag it from the scene. Meanwhile, Ocean City Communications reported the incident had been captured by one of the town of Ocean City’s “City Watch Cameras,” which revealed footage of Grubb and Husby dragging the sign across the Boardwalk.

Grubb and Husby were both arrested and charged with theft and malicious destruction of property. The sign was owned by Ripley’s Believe it or Not and the sign, post and cement base were valued at around $300. The damage to the Boardwalk, the steps and the pavers on Somerset Street were valued at under $1,000.

Last week, Husby pleaded guilty to malicious destruction of property and was fined $500 and placed on probation for one year. Grubb is expected to appear in court on the same charges in January.

BERLIN — A Berlin man was arrested on fleeing and eluding charges in September after leading police on a high speed chase first on a dirt bike and then on foot pleaded guilty last week and was placed on probation and fined $300.

Around 5:50 p.m. on September 18, a Worcester County Sheriff’s Deputy was patrolling in the area of Germantown Rd. and Harrison Rd. in Berlin and attempted to stop a dirt bike for failing to stop at a stop sign and for being an unregistered vehicle on the roadway. The operator, later identified as Gilbert Leon Foreman, 34, of Berlin, failed to stop and continued to flee on Harrison Road to Assateague Road and then to Seahawk Road.

Foreman then turned on Sinepuxent Road where the dirt bike reached speeds exceeding 80 mph in a 40 mph zone. He then fled to Henry Road where he drove the dirt bike into a wooded area, ditched it and fled on foot. A K-9 unit was deployed in the area and was able to track Foreman through a heavily wooded area to a residence located on Henry Road.

Once the suspect was located, he began running again and began to crawl under a porch. He was finally taken into custody. Last week, Foreman pleaded guilty to attempting to elude law enforcement and was fined $300 and placed on probation.

WEST OCEAN CITY — A Salisbury woman arrested on possession charges in September after being found with drugs in her purse at the Park-and-Ride in West Ocean City pleaded guilty last week and was sentenced to two days in jail, which was then suspended in favor of a fine.

Around 10 p.m. on Sept. 18, Worcester County Sheriff’s deputies were patrolling at the Park-and-Ride in West Ocean City when they were flagged down by a citizen reporting a male harassing a female in the area of the bus station. Deputies identified the female a Kim Van Duuren, 37, of Salisbury. During the course of the investigation, Van Duuren allegedly admitted to having marijuana in her purse.

Last week, Van Duuren pleaded guilty and was sentenced to two days in jail. The sentence was then suspended and she was fined $200.