With Christmas approaching, the males of the house knew full well what we needed to do last weekend.

The lady of the house was in desperate need of some peace and quiet to get our family ready and organized for the holiday. In a normal year, this would be understandable because the holidays always get a little stressful with no school, short work weeks and the typical frenzy that comes with the whole thing.

It’s even more so this year because we have a significant home improvement project going on — transforming our unfinished basement into a play room for the kids. This has been a vision of Pam’s ever since we moved into the house nine years ago. I was skeptical due to the limited space and was a bit sidetracked by the generations of stuff that had been accumulated by and left behind by previous homeowners since the house was built in 1908.

Once it was cleaned out, however, I started to buy-in wholeheartedly to what she had in mind, and we are now in the final days of the project with a grand reveal planned on Christmas morning after the kids have been through all their Santa gifts.

It should be memorable, as they don’t know anything about the project. We have been telling them all the banging and debris is a result of major repairs.

With that effort nearing the end and her long to-do list seemingly growing every day, I offered to keep the kids away from the house as much as possible last weekend so she could be productive.

On Sunday, Beckett and I met Pam back at the house after his soccer game to get Carson, who she took to swimming lessons. After lunch, we headed to Beach Bounce in West Ocean City. I told the boys we were on no timetable so long as they were behaving.

As we approached our third hour, I noticed Carson fading fast. His eyes said pure exhaustion, which was only confirmed when he refused to go into any more of the inflatables. He kept signing “all done,” but the problem was his brother was still in full go mode and loving it. 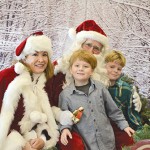 Since we only have so many years when the kids will partake in the Santa tradition, here’s our annual photo of the kids, ages 7 and 6, with Santa and Mrs. Claus. Merry Christmas from our family to yours. Here’s to hoping it’s a special one for everyone.

I spent the last hour trying to keep Carson entertained with the arcade games while Beckett and some newfound buddies flipped, jumped, ran and bounced all over the place. It worked for a while but eventually Carson needed to go. All parents know when their kids have had enough and it was evident. The final straw was when he started walking up on the skee ball machine and trying to slam dunk the balls through the enclosure. That was just one of the examples of random craziness that defied logic over that last hour.

On Saturday after church, with the same goal of giving Pam some holiday prep time at home, I took the boys to the model train garden in Snow Hill.

Beckett went kicking and screaming, for the most part, while Carson was more excited for this excursion than the bounce house. He has always loved trains and we knew this would be a lot of fun for him.

Once we arrived at the Pocomoke River Canoe Company, he just couldn’t contain his excitement. He was so thrilled by the entire scene he lost all sense of self-control. Despite repeated requests from me as well as the operators, he continually touched the trains, causing at least one derailment that I know of. I’m sure there were more as I kept my head on a swivel between kids. He was clearly overwhelmed by the entire scene and there was no getting through to him that he had to keep his hands to himself.

After about 20 minutes — which seemed liked hours to me because of the pressing man-to-man defense I had on him at all times — we headed out. Even Beckett, the detractor of our bunch, admitted it was really impressive all the while reminding me that I promised him we would play soccer when we got home. All the while Carson cried while continuously pointing back and signing “more.”