BERLIN – Thousands of area children will again descend on Stephen Decatur High School during the coming days for the 39th rendition of its beloved Children’s Theatre.

The school’s drama department will host its 39th Annual Children’s Theatre Dec. 2-14. This year’s production, Fractured! Goldie and the Bears, is the first piece written and directed by Brandon Cater, the drama teacher who replaced SDHS icon Gwen Lehman upon her retirement this spring.

“I wanted the challenge,” Cater said. “You get a different perspective when you get a story told from a different set of lips.”

Nearly 10,000 children from elementary schools throughout the region will attend this year’s Children’s Theatre. Just as his predecessor did, Cater has taken a familiar children’s story — Goldilocks and the Three Bears — and modified it to entertain the young audience.

This year’s production tells the story of an impressionable young Goldie who is swayed into misbehavior by Little Red Riding Hood. Other familiar characters, ranging from the Gingerbread Man to the Fox and the Hound, make appearances in the story as well.

He says his students have had a significant amount of input into the play, which has created a unique production.

“The patchwork of artistic creativity has become the theme of the show,” he said. 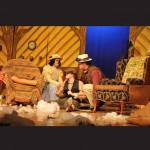 Of taking over as director of the Children’s Theatre, drama teacher Brandon Cater said, “I wanted the challenge. You get a different perspective when you get a story told from a different set of lips.”

Cater, a 2002 graduate of Decatur, says that while he wanted to follow in Lehman’s footsteps and write his own production, he didn’t have complete confidence in the piece until he saw his students bring it to life.

“You have to take it from the page to the stage,” he said. “It was one of those immense challenges where you feel so cleansed when you see it come to fruition.”

Though in his first year of teaching at SDHS, Cater spent his high school career as member of Lehman’s drama program and says he took the job with the goal of continuing her legacy.

“I didn’t know if I was right for the job,” he said. “I wanted it because I wanted to keep the program alive.”

Lehman, who retired in June after 46 years in the classroom, says she’s eager to see Cater maintain the traditions she started, particularly the Children’s Theatre and the maintenance of the Gladys C. Burbage Courtyard Theatre.

“Brandon has multiple skill sets that will serve to continue and to build the program,” said Lehman, who still remembers the parts Cater played during his high school acting career. “He is also high energy, determined, and passionate about theatre. I thought he had the right combination of enthusiasm and background that would help the community to continue to see the value of theatre as an educational tool.”

Lehman says she loved teaching drama, particularly each December as she watched kids from the tri-county area pour excitedly into the auditorium for Children’s Theatre, and was hopeful her replacement would bring the same passion to the job.

“It was hard for me to give up my theatre work at Decatur as it was such a big part of my life,” Lehman said. “It was also particularly fulfilling as work—work that didn’t always feel like ‘work.’”

That’s something Cater, though still settling in to his new role, has already realized.

“It’s not always easy but it’s definitely fun,” he said. “You go to work every day and you’re smiling.”

Stephen Decatur High School will host Children’s Theatre performances daily through Dec. 14 in the auditorium. Tickets are $8 for adults and $5 for students. Evening performances will be held Dec. 4 and Dec. 5 at 6:30 p.m. For more information call 410-641-2171.