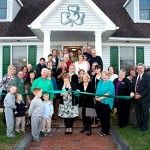 Shamrock Realty Group recently moved its main offices from Route 50 in Berlin to Route 589. With the help of the Ocean Pines Chamber of Commerce, the company celebrated the move with a ribbon cutting Nov. 17. Licensed in Maryland and Delaware, Shamrock has approximately 20 affiliated Realtors and licensed sales associates to serve their customers. Above, chamber officials are pictured with company representatives at the grand opening celebration. Photo by Ted Page 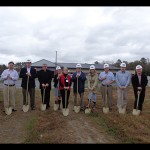 SALISBURY — The Board of Directors, Executive Team and OB/GYN Department of Three Lower Counties Community Services, Inc. (TLC) has announced plans to construct a new OB/GYN office on the Woodbrooke Medical Campus in Salisbury. Actual construction is expected to begin in early December with an expectation of completion by January 2017.

“We are grateful for the support of our partners and clients. We appreciate all of the hard work that has made this day possible,” said Father Christopher LaBarge, TLC Board Chairman.

The new OB/GYN office will replace the OB location at the Riverside Medical Complex and the GYN location on Phillip Morris Drive that opened in 1972. It has been a goal for TLC to combine the offices since August 2010. The addition of a board certified urogynecologist and five certified nurse midwives further stressed the inadequate space.

Gillis Gilkerson was hired to build the new 21,000-square-foot building, which will allow further expansion of services and support the excellent standard of care delivered by the providers of Eastern Shore OB/GYN, the Women’s Health division of TLC.

“We are dedicated to providing solutions to our customers,” said Palmer Gillis, founder, chairman and CEO of Gillis Gilkerson. “TLC’s new combined space will accommodate both their growing patient load and expanding staff and allow for further expansion of services to the community.”

TLC CEO Susanne Gray added, “This day concludes a long journey to begin the construction of a sorely needed building to provide prenatal, preventive and interventional care to our patients. We have no more closets to convert to office space. No patients will be restricted access because we lack exam rooms.”

FRUITLAND – Restaurant 213 was recently named one of the 100 Best Restaurants for Foodies in America for 2015 by OpenTable. The list of winners is derived from more than five million reviews submitted by OpenTable diners for more than 20,000 restaurants in all 50 states and the District of Columbia. It was one of the only two restaurants named in the State of Maryland.

The food at Restaurant 213 is far from your conventional Chesapeake Bay fare. A former apprentice of Roger Vergé in southern France, Chef Jim Hughes prepares unpretentious, globally influenced cuisine inspired by the area’s plentiful ingredients. Hughes catered many events for Ronald Reagan, while he was president of the United States and also served as Chef for the King of Saudi Arabia at the Saudi Arabian Royal National Guard military academy. Hughes has been honored by the James Beard Foundation, DiRoNA (Distinguished Restaurants of North America), and was awarded the highest rating of 3 Stars from Frommer’s Travel Guide, making it one of only three restaurants on the Eastern Shore.

“I was a bit shocked at first, when I received the phone call from OpenTable congratulating us as one of the top 100 restaurants in America,” said Hughes. “This has been a banner year for us in terms of accolades with us also being named Coastal Style Magazine’s 2015 Best Chef, Best Special Occasion Dining and Best Fine Dining Restaurant, and 2015 Best Special Occasion Restaurant by Metropolitan Magazine.”

The business will be open daily Monday through Friday and offer classes in driver improvement and three-hour drug and alcohol classes.

Both operators have certifications through the MVA and 12 years combined teaching in these classes. Larry Buchanan is also a retired paramedic from the Town of Ocean City after serving 30 years. Classes will be offered six days a week, days and evenings. Call 410-390-5337 to learn about the present schedule.