BERLIN – The community honored a dedicated volunteer and environmental advocate last week with a bench in his honor.

Ocean Pines residents surprised longtime community member Bob Abele with the installation and dedication of a bench in a grassy area along Ocean Parkway Nov. 20. Abele spent years working with the Maryland Coastal Bays Program first and then the Ocean Pines Association Board of Directors and its various advisory committees.

“It was an extreme surprise,” Abele said. “I didn’t expect anything like that. It was a heck of an honor.”

Abele can now see the bench, which sits along the water between Wood Duck I and Wood Duck II, from his home. The plaque affixed to the wooden bench reads, “In recognition of Bob Abele who has bettered our OP quality of life.”

Austin Scorpio, the Pines resident who recently replaced Abele as chairman of the Ocean Pines Environmental and Natural Assets Advisory Committee, said committee members wanted to do something to acknowledge Abele’s efforts through the years.

“With his commitment he’s made amazing contributions to Ocean Pines and greater Delmarva,” Scorpio said.

He said the location near the Wood Duck neighborhoods was perfect for the bench because it was well traveled by residents. 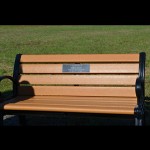 A number of community members and friends of Abele attended the brief ceremony to thank him for his years of dedication to the community and its waterways. Abele, who moved to Ocean Pines in 1992, spent nearly a decade working with the Maryland Coastal Bays Program as a member and later chairman of its board of directors. He also represented his homeowner’s association on the Ocean Pines Association Board of Directors and later served as a member of the Marine Advisory Committee and most recently as chairman of the Environmental and Natural Assets Advisory Committee.

“The man is a treasure to Ocean Pines and Worcester County,” said Marty Clarke, a former member of the board of directors and current member of the Environmental and Natural Assets Advisory Committee. “He doesn’t do anything for himself.”

Dave Blazer, director of fisheries for Maryland’s Department of Natural Resources, worked closely with Abele when he served as executive director of the Maryland Coastal Bays Program. Though he was unable to attend Friday’s ceremony, he said Abele’s recognition was well-deserved.

“Bob’s one of my favorite people,” Blazer said. “He has done great work for the community.”

He said Abele, who’d made a living as an engineering manager, represented his Pines constituency well with a calm manner that garnered the respect of those around him.

“He had a good delivery that made you pay attention,” Blazer said. “He didn’t have the environmental foundation you’d think of but that’s what made him effective. He could take an issue and analyze it and be able to talk about it fairly. He wasn’t biased with a tree hugging attitude or an extreme one way or the other.”

Abele said he’d always enjoyed spending time on the water and grew interested in the issues facing local waterways when he moved to the Pines.

“I had an opportunity to get into the initial investigation and I found it to my liking,” he said.

While local waterways still have their problems, he believes the creation of the Maryland Coastal Bays Program has made huge strides in education and advocacy.

“The program has tentacles into everything,” he said. “It’s done a wonderful job.”

Abele says what he’s enjoyed the most during his decades of service to the community is the people he’s worked with.

“It’s nice to see the energy and dedication around these things,” he said.