OCEAN CITY – The Cowboy Coast Country Saloon and Steakhouse has ignited its menu this summer featuring steaks, seafood and barbeque.

Cowboy Coast opened its doors last May after taking over the Party Block on 17th Street and Coastal Highway. Last summer the night club focused on establishing its country roots in Ocean City, while this summer the restaurant kicked off.

Cowboy Coast’s menu hit the tables in June, featuring their own homemade recipes down to pickling their own pickles and secret rub recipe. Bogosh worked with Chef Will Sturgess in crafting the steakhouse menu.

“We do everything in house,” Bogosh said. “Everything is made from scratch.”

With Cowboy Coast’s menu only in its first season, the Kickin’ Crab Chowder has already won first place in the White Marlin Festival Crab Soup Cook-Off, which was held in May.

The menu features several cuts of steak that are butchered and hand cut in house. There is the Cowboy Ribeye, filet, New York strip, flat iron and sirloin that are all sprinkled with their famous house made rub and cooked to the preferred temperature.

“It is not overpowering, so for people who like a traditional steak it adds a nice flavor,” Bogosh said of the house made rub.

Another popular menu item is the Beer Can Chicken, which is their famous dry rubbed and slow roasted chicken cooked right on top of a can of Natty Boh beer and served with their hand cut fries and creamy coleslaw. 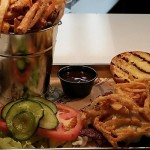 Wednesday is Live Band Karaoke night with 25-cent Miller Lite and Coors Light drafts starting at 8 p.m. and increasing 25 cents every hour until midnight, as well as $5 Cowboy Juice and DJ Adam Dutch playing the best mix of country, dance and mainstream music from 11 p.m. to 2 a.m.

Cowboy Coast has a total of six bars with one in an outdoor courtyard under the sun, as well as a brand new open-air kitchen, and a comfortable steakhouse dining room. The most recent renovations filled in the former pool providing space for additional parking, indoor and outdoor seating and a beach with corn hole and beer pong and flip cup tables.

To view all that Cowboy Coast has to offer, such as the entire entertainment schedule and nightly specials, visit www.cowboycoastoc.com or check out its Facebook page.