OCEAN CITY — Beachgoers in Ocean City got a close and personal glimpse of Kemp’s Ridley sea turtles on Monday when National Aquarium staffers released three of the rehabilitated creatures from the beach at 40th Street.

The National Aquarium’s Marine Animal Rescue Program on Monday released three Kemp’s Ridley sea turtles from the beach in Ocean City. A big crowd, including many local officials, gathered to watch as the three turtles were carried to the water’s edge and released before swimming away.

Throughout the winter, hundreds of cold-stunned sea turtles were discovered on the beaches up and down the mid-Atlantic region and many found their way to the National Aquarium and other similar rehabilitation facilities. The sea turtles hit patches of extremely cold water during their typical migration patterns to warmer climates and the cold water literally stuns them to the point their bodies start to shut down. Unable to swim and navigate, the disabled sea turtles are at whims of the tides and often strand on area beaches. 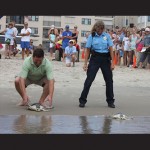 The three different releases of rehabbed sea turtles during the month of July continued a very active period of releases from area beaches for the National Aquarium. In early June, National Aquarium staffers released a juvenile grey seal that had been rescued from a Delaware beach this spring on Easter appropriately named Lilly. The seal, which had suffered a broken jaw and was transported for rehabilitation in Baltimore, was the National Aquarium Animal Rehabilitation Program’s 150th successful release.