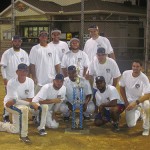 The Ocean City Recreation and Parks Department’s 2015 Men’s Softball League concluded last week with champions crowned in both the Bayside and Atlantic Divisions. In the Bayside Division, the BYB team pictured above took the title with a 12-4 win over Abbey Burger in the championship games. In the Atlantic Division, it was the Fisher’s Popcorn team pictured below winning the championship. 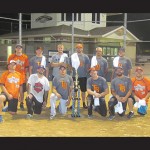