Around 6:30 p.m. last Saturday, two OCPD bicycle officers were patrolling in the area of 14th Street and St. Louis Ave. when they noticed a suspicious vehicle. As the officers approached the vehicle, they clearly observed and smelled marijuana, according to police reports.

The third unnamed suspect was issued a civil citation for possession of marijuana and was released. Estima and Sharp were taken before a District Court Commissioner. Estima was released on recognizance, while Sharp was transferred to the Worcester County Jail on a $10,000 bond.

OCEAN CITY — A Pennsylvania man was arrested on first-degree assault charges last weekend after allegedly strangling his girlfriend while she was holding a child at a downtown Ocean City condo.

Around 6:30 p.m. last Saturday, Ocean City Police responded to a unit in the Suncoast Condominium for a reported assault. OCPD Communications advised the officers the victim had locked herself in a bathroom and the suspect had left the scene. The suspect was described as wearing camouflage shorts with a lot of tattoos. The officer made contact with the female victim, who informed them the suspect, identified as Christopher Hilpl, 26, of Dublin, Pa., had left the unit and had likely gone to the beach.

An OCPD officer went to the condo balcony and observed two males on the beach nearby wearing camouflage shorts. The victim was brought to the balcony and pointed out Hilpl to the officers. An OCPD officer went to the beach and made contact with Hilpl, who appeared to be intoxicated and upset. According to police reports, Hilpl told the officers he “just got into a yelling match,” and “all I did was scream and leave.”

Meanwhile, another officer interviewed the female victim back at the condo unit and she told police Hilpl had strangled her. The victim told police she and Hilpl along with their child were staying in the condo and that Hilpl had been drinking all day. When Hilpl returned, the victim told police she accused him of cheating on her and that he became upset and began screaming. When the argument escalated to a physical confrontation, Hilpl allegedly placed his hands around the victim’s throat and began to strangle her.

According to police reports, the victim told police Hilpl strangled her to the point she began to lose her breath although she never lost consciousness. The officers observed signs of injury corroborating the story along with scratches on her neck and back. The victim also told police Hilpl had bitten her right middle finger during the confrontation.

The OCPD officer asked the victim a series of questions from the domestic violence lethality screen to which she answered yes. Among the questions were the following: Has he threatened to kill you? Do you think he might try to kill you? Does he have a gun or can he get one easily? Has he ever tried to choke you? Is he violently or constantly jealous or does he control most of your daily activities? Have you left him or separated after living together of being married? Does he follow or spy on you or leave threatening messages?

The victim told OCPD officers she feared Hilpl might send someone to come after her. She also told police Hilpl knew several people in prison. Based on all of the evidence and testimony, OCPD officers charged Hilpl with first-degree assault because he allegedly placed the victim in danger of serious physical injury or death. Hilpl was also charged with reckless endangerment because the altercation with the victim placed her and their one-year-old child in jeopardy of serious physical injury.

Hilpl was also charged with malicious destruction of property for breaking the victim’s iPhone valued at $650. Hilpl was taken before a District Court Commissioner and was later released on a $20,000 bond.

WEST OCEAN CITY — A Port Deposit man was arrested on trespassing charges last week after repeatedly going back to a West Ocean City campground after being told not to following a domestic dispute.

Last Friday, Worcester County Sheriff’s deputies responded to Frontier Town in West Ocean City for a reported domestic dispute between a boyfriend and girlfriend. Through the course of the investigation, it was determined the male suspect, Jonathan A. Matthews, 28, of Port Deposit, Md., was asked to leave the property by security and management because of his alleged disorderly conduct during the domestic incident.

Matthews was issued a trespassing notice and escorted from the property by the deputies. Around 2:20 a.m., Matthews was found back on the campground property attempting to make contact with his girlfriend. He was arrested and charged with trespassing and was later released on a criminal citation. 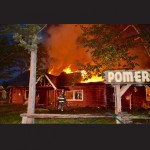 Approximately $300,000 in damages occurred at the Pomeroy’s Bar and Package Goods Store on Route in Selbyville early Monday morning. Photo by David Coleman

SELBYVILLE — An early morning fire on Monday ravaged the historic and decidedly colorful Pomeroy’s Bar and Package Goods Store on Route 113 in Selbyville just north of the Maryland-Delaware line.

Around 5:15 a.m. on Monday, multiple fire companies from lower Sussex County and Bishopville in Maryland responded to a reported fire at Pomeroy’s on Route 113 just north of the Maryland line. First-arriving units found heavy fire and smoke pouring from the two-story commercial structure utilized as a liquor store and bar. The establishment was not open at the time and no major injuries were reported.

The commercial building was almost completely destroyed before the fire was brought under control. The initial damage estimates came in at around $300,000. The cause of the fire is still under investigation by the Delaware State Fire Marshal’s Office.

FENWICK ISLAND — A fire at a popular bayfront restaurant near the Maryland-Delaware border last Thursday evening was contained to a mechanical room where it originated. While the establishment lost what would have likely been a busy summer night, the overall damage was limited and it re-opened by the following afternoon.

Around 4:45 p.m. last Thursday, multiple fire companies from lower Sussex County and Ocean City responded to a reported fire at Harpoon Hanna’s along the bay at 146th Street. The fire was quickly brought under control and limited to the mechanical room where it originated, although the business was forced to close for the evening. By Friday afternoon, Harpoon Hanna’s issued a statement thanking firefighters and the community for their support and announced the popular restaurant was preparing to re-open.

“Thank you everyone for your concern and well wishes,” the statement released on Friday afternoon read. “The fire was contained to the mechanical room and there was minimal damage. We worked through the night to be open at 3 p.m. today.”