OCEAN CITY – The new auditorium and performing arts stage at the Roland E. Powell Convention Center was receiving its finishing touches this week with the kick-off event scheduled for Wednesday.

“We are about 98 percent complete as of a couple hours ago. It is changing by the minute. We are in the cleaning process right now,” Convention Center Director Larry Noccolino said on Wednesday. “I am so surprised looking at the 98 percent finished product. I really didn’t think it was going to turn out as beautiful as it is. It is just amazing, it really is.”

The new Performing Arts Center (PAC) will host concerts, musicals and theatrical productions as well as seminars with its state-of-the-art equipment and two tiered seating with a total of 1,200 seats, dressing rooms, concession areas and a box office.

The construction of the PAC is the second phase of a major convention center expansion that began on Oct. 20, 2013 with demolition work in the old sections of Hall C on the ground floor of the convention center and a demising wall going up on the second floor in what used to be part of Halls A and B. The floor-to-ceiling demising wall separates the relatively new bay-front ballroom on the second floor that was part of the first phase.

The second phase cost $14 million and is being funded in part by the state through the Maryland Stadium Authority at $5.7 million. The Town of Ocean City is funding the remaining $8.3 million, which is covered by a 2013 bond issue.

The event is featuring economist Anirban Basu with an economic update for Worcester County, Ocean City and the Lower Eastern Shore plus an update on Maryland offshore wind.

To register for this free event in advance, contact Merry Mears at mmears@co.worcester.md.us. 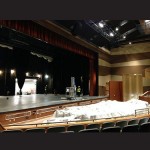 On Thursday morning, crews were busy cleaning the new performing arts auditorium in advance of next week’s first event. Photo by Joanne Shriner

The second event to be held in the new PAC is the “Deep in the Heart of Christmas” show by the Texas Tenors starting at 8 p.m. on Saturday, Dec. 13. The Texas Tenors sing Country, Pop, Classical, Broadway and much more in what is being billed by the city as a “fun filled entertaining show.”

The Texas Tenors, featuring JC Fisher, Marcus Collins and John Hagen, have performed for over 100 million people around the world.  The group formed in 2009, the same year it made its television debut on NBC’s America’s Got Talent becoming the highest ranking vocal group in the history of the show.  Since then the band’s fame has continued to grow as it has played to sold out venues worldwide, have had its own PBS “You Should Dream” TV Special and is one of the most popular theatre shows in Branson, Mo.

Joining The Texas Tenors will be special guest, The Reminders. The Reminders represent a lifetime of music, having written famous and prize winning songs, recorded and produced all kinds of styles and played on recordings all over the world.  Called Delaware’s premier original Americana band with roots in gospel, blues and country music, organizers believe the group is the perfect addition to an inspiring show.

Visitors will meet with the Mayor and City Council, and view the pictorial history of the convention center, while also having the privilege to enjoy a first-look of the auditorium.  This rare glimpse, which takes place before the official PAC Ribbon Cutting, will also offer free entertainment by Bryan Russo with several special guest performances.

Also participating inside of the event are several of the town’s community partners, while outside the festively decorated convention center, the Ocean City Fire Department will have equipment on display and also back by popular community demand will be the mounted police and canine units of the Ocean City Police Department.

The PAC Ribbon Cutting will take place on Jan. 17, which is Martin Luther King holiday weekend, when the Mid-Atlantic Symphony Orchestra and Conductor Julien Benichou will perform, along with the OC Stars from Ocean City Elementary School.

Noccolino also announced this week on May 7 the Ballet Theatre of Maryland will perform Cinderella at the PAC put on by the Ocean City Library. The performance will be followed by a meet and greet with Cinderella and Prince Charming. Tickets are $10, and are available at the convention center’s box office and all Worcester County Library Branches.

Many other events have been booked at the PAC, as convention center staff has been scheduling events for the new facility since the beginning of construction.

“It is going to be very busy,” Noccolino said.