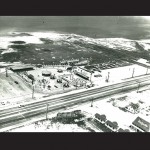 A then-and-now sequence of what the land where Jolly Roger Amusement Park is located looked like in 1964, left, and today. Photos courtesy of Jolly Roger 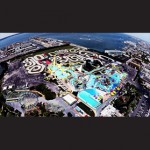 decades of making lasting memories for generations of families on Tuesday with a special ceremony marking its 50 anniversary.

Owner and developer Charles “Buddy” Jenkins and his staff, many of whom have been with him for decades, on Tuesday hosted a 50th anniversary celebration for the park. Ocean City Mayor Rich Meehan, County Commission President Bud Church, Senator Jim Mathias, former Ocean City Mayor Roland “Fish” Powell and a veritable who’s who of local elected officials and dignitaries were hand to fete Jolly Roger’s 50th anniversary on a sweltering afternoon at the iconic park.

In 1964, Jenkins, who owned a large parcel of bayside property in Ocean City, met with Arnold Palmer’s agent Mark McCormick about a potential project. Palmer, golf’s reigning king at the time, was developing driving ranges and miniature golf courses all over the country.

Jenkins purchased a franchise and in July 1964 opened the Arnold Palmer Putting Course and Driving Range on the site that now hosts Jolly Roger. The following year, 10 amusement rides were added and over the next several years, Jolly Roger became established as a major tourist destination. In 1974, Jenkins purchased the Ocean City Pier Company and after a multi-million dollar renovation to the historic pier at the Boardwalk near the Inlet, he opened the Pier Rides, which would become Jolly Roger at the Pier.

Over the next few decades, Jolly Roger became a full scale amusement park with a wide array of rides and attractions and even live shows, including the Flying Wallendas, the Royal Hanneford Circus and the Parker Playhouse. Most importantly, in the 1970s, Jolly Roger added the first go-cart track and planted the seeds for what would become Speed World. Today, Speed World hosts one the largest collections of go-carts and tracks in the country with 11 tracks and 400 cars. Later, Splash Mountain, the crowning jewel of the ever-evolving Jolly Roger Park, began to develop. Splash Mountain this year was named the Best Small Waterpark in the country by Funworld Magazine, the amusement industry’s leading trade magazine.

“This business has been thriving for 50 years because of Buddy Jenkins and his vision for this property,” he said. “This has been a wonderful park for generations. When you think of all the people who worked here and work here and all of the jobs created, it is a remarkable tribute. When you look at what has evolved here, you can see why Ocean City is the best beach resort on the East Coast and that is exemplified here at Jolly Roger.”

“Thank you on behalf of the County Commissioners,” he said. “You had a vision few had back then and this park is a great asset for Ocean City, Worcester County and all of Maryland.”

Senator Jim Mathias related the story of being a young businessman in the resort struggling to find his way after his father passed and how he went to Jenkins for guidance. It was a recurring theme throughout the ceremony.

“I spend the last 43 years of my life in this park and on that pier,” he said. “Thanks for all of the memories you created.”

Jenkins was somewhat taken aback by the praise for the park and his accomplishments and those of his crew, many of whom have been with him for decades. He specifically pointed out Margie McBain, who has been with the company for 47 years, and Mike Jones, who has overseen the operation for 40 years. Jenkins recognized dozens of other employees who have been with Jolly Roger for 15, 20, even 25 years or more.

“This is one of the rare times in my life that I am overwhelmed a little,” he said. “I really need to recognize the employees past and present. They had the faith and trust … and then made it happen with what you see here today. They deserve the accolades because they have earned it.”

Jenkins said the park evolved over the years largely through trial and error. There were obvious things that worked and others that were attempted and failed. For example, the first concrete water slide came about when the park had a huge mountain of dirt from the holes it had to dig for other projects and there was nowhere else to put it. Jenkins said from that early concrete slide came Splash Mountain.

“The main thing has always been to keep it simple,” he said. “We’d try things, watch them and analyze them. The important thing is always pay attention to the public. They’ll tell you what they want and what they need. We’re always trying to figure out how we can do it better. The parks are always evolving and we’re not finished yet. We have new and exciting things on the drawing board.”