Hosted by Robert Hammond, “What a Wonderful World,” is a mix of travelogue, health education and foodie’s dream. Best described by Robert Hammond’s son Bobby Hammond as a “variety show,” the cast and crew might find themselves up and across the country with short notice.

“Dad says, ‘hey man, I want to go to California,’ then we’re going to California,” said Bobby Hammond. “We’re packing up the cameras and going out to see what California does best.”

This month, however, the crew didn’t have to go quite so far as the show was filmed in Fenwick Island at Nantuckets Restaurant. Opened in 1991, Nantuckets specializes in seafood dishes and steaks and brings New England flavors to the Eastern Shore.

While filming the show, Robert and Bobby Hammond as well as Nantuckets co-owners David and Janet Twining and several guests, got to chow down on some of the restaurant’s signature dishes like a blue cheese crusted filet, lobster Shepard’s pie and a seafood tower loaded with oysters, lobster, shrimp and Alaskan king crab.

Nantuckets is a popular spot in Fenwick because the emphasis is always on quality over anything else, according to David Twining, who also operates the Lobster Shanty along with his wife, Janet. The quality extends to customer service with the restaurant offering a shuttle service to patrons. Fenwick is “probably the nicest area on the beach,” Twining continued. The quiet community can be a sharp contrast with its more animate neighbor Ocean City, but that calm is often considered a welcome change.

Filming a show in nearby Fenwick was also a welcome break for “What a Wonderful World,” as the cast and crew have been hopping around the country since the show first began production this year.

“I started filming this in the winter time,” said Robert Hammond. “When we went down to Houston, it was the dead of winter.”

Besides Fenwick and Houston, the crew has visited Boston and Philadelphia, Salisbury and Atlantic City. Food and restaurants from each city are featured in their respective episodes and tend to symbolize their area. For example, a spotlight was put on cheesesteaks in Philadelphia, Tex-Mex in Houston and pizza in Boston. 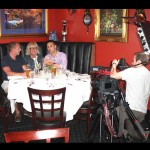 “What A Wonderful World” host Robert Hammond, left, is pictured with his guests at Nantuckets during last week’s taping of the next television show, which airs on WMDT as well as on Comcast and Mediacom networks.

Besides food, “What a Wonderful World” also puts a big emphasis on meeting and learning about interesting people. A former boxer, Robert Hammond still has a lot of ties to the community and thus has interviewed several up-and-coming fighters on the show.

“We have this one kid, he’s up in Boston, his name is Mark DeLuca, you’re going to want to remember that name,” said Robert Hammond.

Along with fighters on the rise, the show has also featured some big names in the sport like Micky Ward, the boxer who served as the real-life inspiration for 2010’s The Fighter, starring Mark Wahlberg. In addition to boxing, Ray Flynn, former mayor of Boston, and Ben Tate, a running back for the Cleveland Browns, have appeared on the show. Tate is well-known locally, having attended both Stephen Decatur and Snow Hill High Schools, setting several state records during that time.

“We’ve got a lot of good fighters on there. We’re going to concentrate on my favorite sports, boxing and football,” said Robert Hammond. “That’s what I know the most. So that’s what we’re going to do but we’ll do some stuff in between, like golf.”

The show also serves as an outlet for the Hammonds to spread information about health and wellness. As the owner of Atlantic Physical Therapy in Ocean Pines, Robert Hammond has spent decades teaching people about rehabilitation and sports medicine and “What a Wonderful World” is another outlet for raising awareness.

“Our TV show aims to let the viewers see what a wonderful world it is through our eyes. From meeting with the doctors that care for the people of our community, to taking the viewers to some of our favorite restaurants, both near and far, the essence of the show is simply what a beautiful place it is that we live in,” he said. “We’ve visited old friends and places that are very near and dear to my heart, and have made many new friends along the way as well. The show also promotes our business, Atlantic Physical Therapy. Through the show, the viewers get a closer look at the sincerity and individualized care we give to each and every one of our patients. We truly keep the care in healthcare.”