OCEAN CITY — Just in time for the arrival of Cruisin’ weekend and the start of the summer season, the heavy equipment pumping and  moving sand all over the resort’s beaches for the last few months is expected to be gone for the most part by Friday afternoon.

Since late February, offshore dredges, heavy bulldozers and huge pipes pumping dark, wet sand have moved from one end of the resort to nearly the other as part of the vast beach replenishment project in the resort. The project, undertaken every four years unless emergency pumping is needed, began in late February at the north end of the resort at 146th Street and has been progressing steadily southward toward a completion at 4th Street.

The original completion date was scheduled for early April, but the unusually harsh winter and multiple severe storms pushed the project’s end back into mid-May. However, the crews accelerated the pace down the stretch and completed the heavy pumping and moving of sand late last week.

City Engineer Terry McGean said this week the pumping has been completed and the demobilization of much of the heavy equipment and pumping apparatus was underway and is expected to be completed by Friday afternoon.

“Demobilization is underway and all equipment will be off the beach by Friday, except for that needed for fence and dune 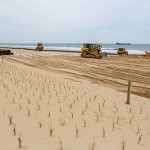 crossover repairs, which will continue through June,” he said.

The project included pumping sand from an offshore dredger through a network of pipes onto the beaches where heavy bulldozers and other equipment spread it out and disperse it in order to widen the beach and repair damage to the dune system. The second phase, which includes the installation of sand fences around the dunes, the planting of dune grasses, signage and other aesthetic features of the project will continue into June, but will not force the beach closures and other interruptions associated with the larger project.

The project is being conducted as part of the regular four-year cycle. The Ocean City beaches are routinely replenished every four years with periodic emergency projects as needed following storms and other natural events. Beach replenishment began in Ocean City in 1994 through a 50-year agreement with the town, Worcester County and the state of Maryland partnering with the federal Army Corps of Engineers, which provides over 50 percent of the funding for the massive undertaking.

The beach replenishment program credited by the city for preventing an estimated $600 million in storm-related damages.