SALISBURY – Tariq Jilani’s dream came to fruition when he opened Taj Mahal Restaurant and Tea House in Salisbury in October of 2013, bringing authentic Indian/Pakistani cuisine to the area.

T.J. left Pakistan in 1974 when he moved to London. In 1977, he moved to the U.S. and attended Long Island University in New York. He landed himself a job in the accounting department of the Rainbow Room in the Rockefeller Plaza in New York City.

“My inclination was always in the kitchen,” he said. “My job was controlling the costs of the kitchen, so I had a lot of interaction with the chefs and the kitchen staff, which fascinated me about this business.”

Next, Jilani managed an Indian restaurant for a family friend on Park Ave. for a few years before leaving to work overseas in 1991. He returned to the U.S. in 1998 where he settled in Salisbury to spend time with his sister who had fallen ill and establish his family.

At first Jilani worked for a steel company in Salisbury before pursuing his dream of opening a restaurant. The opportunity came 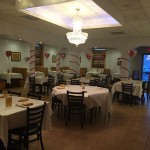 along when the location of Taj Mahal became available in August of 2013. The restaurant took on a complete renovation and had its soft opening in October with a grand opening in November of 2013.

“There is no looking back,” he said. “I am always excited over putting things together. The design all came out of my mind … we got to this point, and I am very pleased of my decision to come to Salisbury.”

Jilani’s wife and three sons are supportive in the family business helping where they can.

“The tradition of our culture is that we are very close-knit family oriented,” he said.

Taj Mahal’s chefs have extensive resumes working with big names on cruise ships as well as in Chicago and New Jersey.

At Taj Mahal, they attempt to give you a taste of exotic culinary heritage to discover the delicious tastes of Indian and Pakistani cuisine. South Asian cuisine makes use of its robust variety of herbs and spices to create some of the most exquisite and flavorful foods in the world.

“There was no Indian/Pakistani restaurant within a 50-mile radius of Salisbury,” Jilani said. “I thought it would be a good service to this community to introduce Indian cuisine to the local people.”

Taj Mahal follows the tradition of sitting down to have tea or coffee in the afternoon along with homemade traditional baked goods and snacks like Samosa, Dahi Bhallay, Pani Puri and Shami Kabab Goal Guppay.

Jilani highlighted several popular items, such as the starters of Pakora that is onion and vegetable fritters, Dahi Bara Chaat that is soft lentil patty served in yogurt and topped with red chili sweet tamarind chutney, and the Mulligatawny Soup that is a lentil soup with tomatoes, lemon, herbs and spices.

Several of Taj Mahal’s most popular main courses are classified as Tandoori. A Tandoor is a traditional open hearth charcoal fired clay oven that is used to bake flatbreads like “naan” and grill or roast beef, lamb, chicken, and seafood. In a Tandoori dish, the meat is marinated in a blend of herbs, spices and yogurt, and slowly cooked in a tandoor to seal in the natural flavors while removing excess fat, resulting in a healthy and flavor-packed dining experience.

Many vegetable entrees are also available such as the Channa Masala, featuring garbanzo beans cooked with spices, onions and bell peppers in a thick and rich sauce.

Several types of naan are baked in the Tandoori, such as Garlic Naan topped with garlic and cilantro.

All deserts are made in-house with Kheer, which is a traditional Indian rice pudding made from rice, milk and sugar, being a favorite of many.

Traditional Indian/Pakistani recipes stretch across the menu right down to the beverage list that includes Mango Lassi, a traditional yogurt shake, as well as masala chai or ginger chai.

Taj Mahal offers dine-in, take out, delivery and catering, as well as has room to book parties up to 100 guests. The restaurant is located at 202 Newton St., and is open every day serving lunch from 11 a.m. to 3 p.m. and dinner from 5 p.m. to 10 p.m., as well as is open for breakfast on Sundays.