OCEAN CITY — A local family that has owned and operated the Majestic Hotel for generations is picking up the pieces and moving on this week after a fire last Friday afternoon at the historic establishment.
Around mid-day last Friday, a fire broke out at the hotel on 7th Street. The Ocean City Fire Department responded as did crews from Berlin and Ocean Pines. Witnesses told investigators they heard a large “boom” come from the building and then reported seeing smoke. Due to the type of construction and the age of the building, a third alarm was called, but members of the Ocean City Fire Department quickly controlled the fire which was extinguished a short time later. 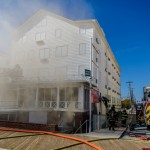 It appeared last Friday that the fire originated in the ground floors beneath Boardwalk level and the initial investigation bore that out. The Ocean City Fire Marshal’s Office determined the fire started in a basement store of the hotel, but the cause is still under investigation. The hotel was closed for the winter and the only person on premise was a maintenance worker. One fire cadet was treated on scene for a minor injury, but no other injuries were reported.
Firefighters remained on scene for several hours as ladder crews and tower truck crews removed the shudders from the upper floors and smoke emanated from the windows on the higher floors of the structure. The Boardwalk was closed to pedestrian traffic for at least a block in either direction as large fire trucks and other apparatus along with a lot of manpower battled the fire and began the cleanup process.
In addition, the side streets from about 5th Street to 8th Street were closed and traffic was snarled on Baltimore Ave. for several blocks as fire equipment blocked the roadway.
On an otherwise picture-perfect mid-October day with crystal clear skies and temperatures in the mid-70s, large crowds strolled the Boardwalk and the beach and many stopped to gawk and take pictures of the fire and the effort to contain it.
The hotel was originally built in 1925 and named the Liberty Farms Hotel. It was renamed the Majestic Hotel in 1930. It has been owned and operated by the Savage family, a family whose name is synonymous with early Ocean City history, for generations. According to a report on the history of the hotel, the lumber used in its original construction was cut in West Ocean City and floated across the bay to its beachfront location at 7th Street. The Majestic Hotel included at least two small stores under Boardwalk level where the fire originated and the Savage family this week was sorting out what to do next and plan for a speedy recovery.
“At this point, all we can do is wait and see what the insurance companies are going to do,” said Will Savage in a Facebook post to supporters this week. “Both of the stores should be covered and should be just an inconvenience. There are several issues that we will need to address with the hotel. We have hired a well-known consulting company to assist us. This will take time and we are not willing to remove anything until we have some answers.”
Much of the damage appeared to be concentrated in the ground level stores although there was likely smoke and water damage throughout the establishment. Savage said the below-Boardwalk level stores were a total loss.
“We have gone through the convenience store and there is nothing of value in the entire place,” he said. “The sunglass shop had smoke damage and due to the nature of the merchandise that we sell, it will likely be a total loss as well. The hotel may take some time to figure out because of the size of the property. We just need to see what is covered and at what price. We intend to fix all three businesses as they were and be open by next summer.”
Savage, a long-time Ocean City firefighter, praised the efforts of the responding crews for containing the blaze and preventing further damage. 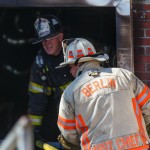 “Twenty years ago this month, at the age of 14, I made one of the best decisions of my life,” he said. “That decision was to join the Ocean City Fire Department. Over the years, I have seen good things, bad things and some horrible things that I only wish I could forget. I have truly made lifelong friendships that are as close to me as family and I have never been prouder of my department.”
Savage said he and his family are forever grateful for the efforts of the firefighters for containing the blaze and preventing further damage.
“Without a doubt, they saved the hotel and who knows how many other buildings,” he said. “I am still shocked that they were able to hold the fire to the unit of origin. Considering the fire load, building construction and access issues, I’m still not sure how they managed to pull it off, but they did and for that I am truly grateful.”