OCEAN CITY- With the drama of the high-dollar, high-profile White Marlin Open dispensed with last week, the resort area’s lady anglers get their turn in the spotlight this weekend with the return of the Poor Girl’s Open, which got underway yesterday with the first day of fishing.Now in its 18th year, the Poor Girls Open,… Read more »

OCEAN CITY- The fastest game on two feet takes center stage in and around Ocean City this weekend when some of the top men’s and women’s lacrosse teams in the country descend on the resort for the 18th Annual Ocean City Lacrosse Classic.The annual tournament got underway yesterday with opening round games in the Masters… Read more » 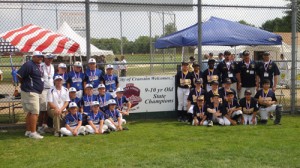 BERLIN- After four tough games in as many days, the Berlin Little League 9-10 All-Stars finally ran out of gas, and pitching, last Friday, falling to Massapequa of New York, 22-0, in the Mid-Atlantic championship in Rhode Island.Berlin’s magical run started with a District 8 championship back on July 13 and continued a week later… Read more »

SNOW HILL — Another attempt in a series of efforts by Worcester County resident Larry Ward to level tighter restrictions on poultry houses failed to get off the ground during Tuesday’s county commissioners meeting.Ward, who is no stranger to the lobbying the commission, came before the body with a text amendment calling for a number… Read more »

SNOW HILL — A Millsboro man, shot by police in February after attempting to run over a Worcester County Sheriff’s deputy during a botched burglary attempt in Berlin, was found guilty yesterday in Circuit Court of second-degree assault and fourth-degree burglary and was sentenced to a combined eight years in jail.Around 10 p.m. on Feb…. Read more »

ASSATEAGUE — Less than a month after the National Park Service announced new regulations aimed at reducing dangerous interactions between visitors to Assateague and the wild horses, a food-aggressive stallion, known for raiding coolers and picnic tables, was sent to a horse rescue and adoption center in Texas for training.Last month, National Seashore officials announced… Read more »

SNOW HILL — A Westminster man, convicted in May of manslaughter for providing a female victim with a fatal dose of methadone and then slowly watching her die while on vacation in Ocean City last July, was sentenced to 10 years in jail last week.After deliberating for over 10 hours following a two-day trial in… Read more »

SALISBURY – An unexpected whirlwind of emotions were displayed during this week’s Wicomico County Council meeting as officials discussed the new Charter Commission’s agenda.In July, the council requested names be submitted by those who were interested to serve on a Charter Commission. The commission’s responsibility will be to review the County Charter, which was adopted… Read more »

SALISBURY – The Wicomico County Council “kicked to the curb” a couple of unscheduled agenda items this week, the county wide burn ban and Plan Maryland.On Tuesday, the county council lifted the burn ban at the request of County Executive Rick Pollitt. The burn ban has been in effect since June 9.As the council was… Read more »